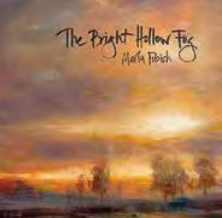 Marla Fibish, “The Bright Hollow Fog” • Fibish is highly regarded for her playing of Irish traditional music on mandolin, emphasizing the instrument’s qualities of tone and sustain over speed, with a superb ability to tease out ornaments and triplets. She’s often been glimpsed in these parts as half of the duo Noctambule with her husband Bruce Victor, but this album is Fibish’s show (although Victor plays guitar on one track), as she holds forth on an assortment of traditional and contemporary tunes, including three of her own compositions, and two songs that are settings of poems by Stephen Vincent Benet and Thomas Hardy.

Fibish accompanies herself on mandola for most of the tracks, using harmonies and counterpoint as well as chording, which adds to the pleasures of “Bright Hollow Fog” – mellow, resonant passages here, bright, lilting, animated sections elsewhere, all confirming the suitability of these lute family offspring for interpreting Irish traditional music.

Nobody’s about to compare the mandolin to the violin in terms of emotional/tonal range, but masterful players like Fibish bring out its shades of personality. Her arrangement of “The Quiet Glen/An Gleann Ciúin,” a slow piece by the late fiddler Tommy Peoples, showcases the instrument’s serene, meditative side, as does the album’s title track – an air associated with the song “Building Up and Tearing Old England Down.” Both of these tracks are Fibish solos, on mandolin and mandola, so you get the full measure of her melodic and rhythmic excellence.

Elsewhere, Fibish is joined by fiddler Martin Hayes on two tracks, including the opener, which combines a leisurely-paced jig (“Humours of Derrycrossnane”) – Hayes playing accompaniment before joining in on melody – with a cracking pair of reels, “Maud Millar” and “Eddy Duffy’s Favorite”;  the other is a trio of jigs that ends with “Jackie Small’s,” one of those tunes that’s more challenging to play than it seems, and therefore all the more fulfilling. That jig set guest stars Vermont musician Keith Murphy, no slouch himself in the fretted-string department; he plays mandola here and on two other tracks – including another trio of jigs that features Fibish’s “Cait the Great.”

It would be unseemly to overlook the album’s two songs, which reflect Fibish and Victor’s penchant for drawing on poetry and literature as source material. The tender, resolute “Riversmoke” (set to music by Fibish and Victor; Fibish provides her own vocal harmony) is derived from Benet’s epic “John Brown’s Body,” specifically the character of Melora Vilas, the unmarried, pregnant daughter of a subsistence farmer. In her soliloquy, Fibish notes, Melora chooses “the rhythms and creatures of wild nature” over conventional religious and social mores: “Good girls sleep with their modesty/Bad girls sleep in their shame/But I must sleep in a hollow tree/Till my child can have a name.”

“Are You Digging on My Grave?” is a classic display of Hardy’s dark, cynical humor (especially where romance and sentimentality are concerned) and Fibish, who sings it unaccompanied, sets the verses to a melody of her own, appropriately grim and morose-sounding – which makes the “shaggy dog story,” as she puts it, all the more morbidly comical.

As Fibish writes in the album’s sleeve notes, she has long thought of the mandolin as having a unique voice in the Irish tradition, especially when given the space to express it; nor can she separate that voice from her own. The songs and tunes, in each their own fashion, lend “Bright Hollow Fog” a quiet, delightful intensity. [marlafibish.com] 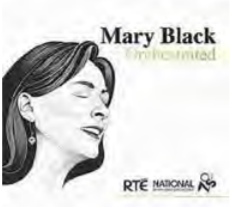 Mary Black, “Orchestrated” • Black, who went well beyond her folk/traditional roots to become one of Ireland’s most influential female singers, largely retired from touring a few years ago, though she still performs in Ireland. Presumably, stepping back from live performances doesn’t necessarily preclude her making new albums, but for now this should do: Musician/composer Brian Byrne selected 11 of Black’s recordings and “reimagined” them by adding orchestrations, played by the RTE Orchestra, to the original instrumentations – plus a few add-ons – and arrangements for each track.

The 11 are gathered mainly from the albums “No Frontiers,” “Babes in the Woods,” “The Holy Ground” and “Speaking with the Angel” – all released during the period of 1989-99, when Black, boosted to a great degree by “No Frontiers” (one of Ireland’s best-selling albums in 1989), developed a strong following in the US and Europe. With backing from stalwart musicians like Donal Lunny, Declan Sinnott, Garvan Gallagher, Steve Cooney, Pat Crowley, Nollaig Casey, and Maire Breathnach, and astute choice of material – from the likes of Joni Mitchell, Richard Thompson and Dougie MacLean, as well as Irish songwriters such as Cooney and Jimmy McCarthy – plus her considerable talents and willingness to experiment, Black cultivated a polished folk/acoustic-based sound, undeniably Irish yet with a cosmopolitanism reflective of Ireland’s growing world presence.

Chances are, you’ve heard Black’s take on most of the selections on “Orchestrated,” like Mitchell’s “Urge for Going,” MacLean’s “Turning Away,” Thompson’s “Dimming of the Day,” McCarthy’s “No Frontiers” and “Adam at the Window,” and Thom Moore’s “Carolina Rua.” The original recordings were made in the confines of a studio, of course, and not envisioned for the sonic depth and breadth of an orchestra, but on the whole they retain their intimacy and the close-knit rapport between Black and her collaborators. Byrne by and large does a good job of reining in and integrating the strings, brass, woodwinds et al, and not going the Full Mantovani.

On “Dimming of the Day,” for example, the orchestra keeps a respectful distance, preserving the lovely vocal harmonies between Black, Sinnott, and Crowley on the song’s hallmark key shift, and the understated artistry in Thompson’s lyrics (“You pulled me like the moon pulls on the tide/You know just where I keep my better side”). “Carolina Rua” opens with a fanfare but immediately clears the way for Black’s exuberant, feisty delivery, including the infectious “doodly-bop-boo-dah” refrain with Mandy Murphy; this setting closes with a rendition of the reel “Crooked Road to Dublin” led by Byrne (on piano and bass), Jack Curran (guitar), Niall Murphy (fiddle) and Eoin Murphy (accordion), augmented by the orchestra. Cooney’s moving “Bless the Road” stops short of being maudlin, as Byrne deploys the swells and fills shrewdly, and Black imbues it with so much dignity that a lump in the throat is more than justified.

Did “Orchestrations” need to be made? Probably not. The original, unorchestrated material still holds up very well. But it is interesting to see how the stylistic and artistic choices Black made then – obviously with no inkling that they would someday be reimagined on this scale – can translate quite reasonably to a “high-art” milieu. Further confirmation of Black’s enduring appeal, if any were needed, and all the more reason to hope for a new, contemporaneous recording project. [mary-black.net]