Danny Diamond and Brian Miller, “Let Fly” • Besides possessing one of the most pleasantly alliterative names (which also sounds like a character from a 1940s Western ) in Irish music, Diamond has a multifaceted portfolio that encompasses the group Mórga, Slow Moving Clouds – an experimental “post-folk” trio mixing Irish and Nordic folk traditions with baroque strings and contemporary influences – and a collaboration with poet Tom French, as well as extensive work as an archivist and sound engineer, including with the band Lankum. But here, Diamond (born in Belfast and now living in Minnesota) is firmly in the Irish fiddle seat, with a dozen tracks of finely curated jigs, reels, hornpipes and other tunes from or related to the music tradition. He’s joined on guitar and bouzouki by Miller, a Minnesotan who is probably most familiar to listeners as a member of Midwestern-based quartet Bua, highly regarded for the reverence and precision they bring to traditional Irish music.

There’s not an obvious, dominant regional influence in Diamond’s fiddle style, but rather a preference for, as he’s explained, innovating from within the tradition in a personalized way – something along the lines of a Tommie Potts, whom Diamond has identified as a key source of inspiration. So, for example, the Donegal pedigree is readily apparent in the set comprising two highlands (the Donegal equivalent of a Scottish strathspey), “Mick Carr” and “Paddy the Cooper” and the reels “McHugh’s” and “Lough Isle Castle.” But Diamond is equally sure-footed on the striking, dorian-mode “Down the Hill,” variously described as a set dance or harp tune, with all manner of flourishes and variations.

Among the album’s many other highlights is a trio of jigs starting with “An Buachaillin Dreoite,” often associated with piper Willie Clancy and sporting a distinctive, powerful surge, followed by the similarly idiosyncratic “Tune Learned from the Faeries,” and ending with “Sean Bui,” which Scottish music aficionados might recognize as the melody for the Jacobite song “Over the Water to Charlie.” One particularly well-put-together medley begins with a mazurka, “Shoe the Donkey,” eases into “Con Cassidy’s Waltz” and then heads on to two reels, the minor-major “Widow’s Daughter” and another Donegal barn-burner, “Marry When You’re Young.”

Miller’s backing is a quiet but acutely solid presence throughout the album, as witnessed by his guitar on the “Boys of Twenty-Five/Old Bush/Mickey Doherty’s” medley and “Mick Carr’s” set. His bouzouki playing is especially pleasing, supplementing chords and rhythm with occasional harmonies, such as on accordionist Jimmy Keane’s jig “April Fool” (which Keane says he wrote in tribute to a joke played on him by fiddler Liz Carroll) and the nimble hornpipe “Love Will You Marry Me.”

Steeped in tradition though “Let Fly” might be, there’s a latter-day relevance to its creation, as Diamond notes on his website. He began sourcing the tunes for the album a year ago as COVID took hold, forcing him to do the work via phone or video calls – which he notes, helped maintain “a connection with home and community during a pandemic-induced exile.” He and Miller then rehearsed the sets (“letting tunes fly”) in the late spring and summer, with Minneapolis wracked by social unrest; the music, he explains, was offered as a salve for troubled times to, and received warmly by, neighbors and passersby – though sometimes interrupted “by city-wide curfews and disrupted by the sound of hovering helicopters.”

Given all that, “Let Fly,” like most any artistic endeavor that unfolded during 2020, is obviously invested with extra doses of will, resilience and emotion. So if you think there might be an extra glimmer of satisfaction and exuberance in the music, you’re not far wrong. [dannydiamond.ie] 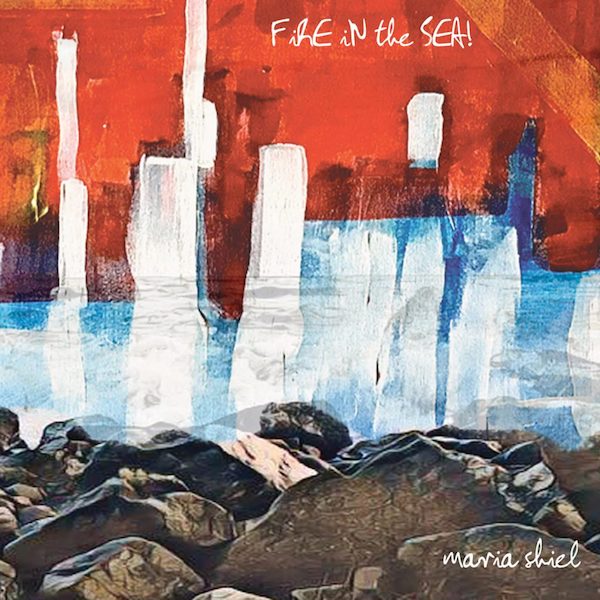 Maria Shiel, “Fire in the Sea!” • Shiel, a singer-songwriter from the west of Ireland, has had an eventful 21st century. She’s been the leader of an Irish roots/hip-hop band; creator of a record label promoting international and cross-genre musical collaborations; worked with musicians from Europe as well as China, Russia and the US; and made excursions into electronica. With “Fire in the Sea!” she extends her range to an elemental Irish-Americana that is as much sited in aquatic realms as dusty roads and rugged landscapes; Shiel’s vision of Americana also encompasses Native American culture, not to mention echoes of the Irish diaspora.

Shiel certainly hits the Americana mark convincingly form-wise: the steam engine-like, classic country 2/4 time of “Calling Me Back” and “Call Home”; bright mandolins, dobros and acoustic guitars – plus gorgeous fiddling from The Waterboys’ Steve Wickham on “Calling Me Back” – alongside gritty, twangy electric guitars; and outstanding down-home vocal harmonies on many of the tracks from multi-instrumentalist Cesar Benzoni. As for Shiel, she may not exactly strike the paradigmatic Mid-Atlantic accent, but neither does she sound like she’s forcing a drawl.

More relevant is less how Shiel sings than what she sings about. Much of "Fire in the Sea!" evokes the wanderlust that seems embedded into the American character, or at least romanticized in its mythology: the notion that salvation or transformation lies somewhere down a two-lane highway, with the occasional stop at a roadside diner. Her songs are of journeys taken (sometimes regretted), contemplated or in progress, for reasons good or ill – or not yet fully understood.

There's the prodigal's-return ebullience of "Calling Me Back Home" ("Oh bring me back to the sound of your singing voice/Even though it threw me out into the void/Even though it sent me packing without choice/Well it’s calling me back home"), for instance, contrasted with the tug-of-war between caution and commitment in "Ebb of the Wave" ("Two rocks in the ocean, gathering time/Each finding their way to roll to feel the pull of the tide/Tomorrow's a long way off, when you hold onto the night").

The breakneck-speed paced "Broken Road" is about taking what one believes to be the metaphorical safe route, only to miss out on real, meaningful growth ("The other name for this road is fear/Fear of being who you are/Fear of listening to your heart/Fear of what others think"). On "Call Home," the narrator offers to be a fixed star by which to navigate ("And I know we live a million miles across the sky/But think of me when you're dry/And I will do my best to pile it high upon the tide/And send it back on in a guiding light").

All this makes for an interesting juxtaposition to the two songs that take inspiration from Native American history and tradition, in particular "Diamonds of Dust," which Shiel based on the notorious 19th-century Trail of Tears relocation. The journey related here is a wholly unwanted, unspeakably tragic one ("One day an army of foreigners came to take our souls away/And drive us from the land that we had built our dreams upon") that left scars of a permanent and spiritual nature: She sings "Where are our bones?/Where are our bones?" It's not much of a leap to connect – as more than a few have – the Irish diaspora to the devastation referenced in "Diamonds of Dust." Yet "Chant Song," which follows a recording of a Native American song/chant ("Nahsodzáán Sin” or "Earth Song"), offers the promise of healing from traumatic events ("The white green flowers of the spring/Will lift you up as life begins/Open doors and shattered lives/Feel the earth as it comes alive").

And the final track, "Photograph," comes across as a benediction, and a strong suggestion to look beyond conventional history and focus on the humanity, and its millions upon millions of individual journeys:

"I'm not talking about wars

I'm not talking about dates

I'm talking about the faces and the lines that were made

Just to give you what you've got

That put you here right now"

Shiel may not be from ’round these parts, but she appears to have a pretty good grasp of the complexities and contradictions that constitute Americana. [mariashiel.com]