In conversation with Dacre Stoker International bestselling author and recognised expert on Bram Stoker´s work, Bram's great grand-nephew tells us about Dracula and his creator.

Dacre, it is a pleasure to ask you some questions about Bram Stoker. Can you tell us where Bram got his inspiration to write ‘Dracula’?

Dacre Stoker (DS): I have been studying Bram’s possible inspirations and motivations, his research and his writing of Dracula for the past 15 years. What I have come up with is that his gothic masterpiece can be best described as a perfect storm of events, which blended his personal life with real life events that he included in the novel, as well as meticulous research.

I feel very strongly that Bram absorbed his dark and deep sense of imagination while growing up in Ireland, stemming from traditional Irish folklore about banshees, pookas, and changelings. He even mentioned in the one interview that he had always been interested in the legend of the vampire and it is “a very fascinating theme, since it touches both on mystery and fact". In the Middle Ages the terror of the vampire depopulated whole villages. 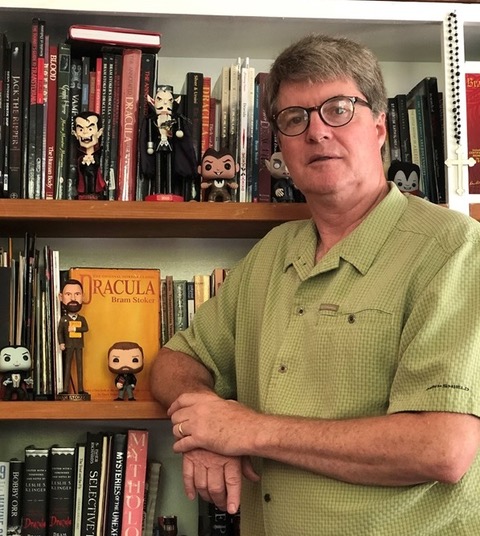 What was it like for Bram to grow up in Dublin at that time?
DS: Bram was born in Black 1847, not a great time to be born as Ireland was suffering from a cholera epidemic and a potato famine, people in the countryside were starving from lack of food, they came into the cites looking for handouts, as a result there was disease and poverty. The scene was described by one as people looking like the walking dead…very sad.

For Bram it was worse. He himself suffered from an undiagnosed illness that lasted until he was 7 years old and confined him mostly to his bed. With the stories he was told of Irish folklore and superstition and his mother´s story of her surviving the cholera epidemic in Sligo as a child, he had plenty of time to develop a rather macabre sense of imagination. It probably did contribute to his writing of Dracula years later.

Can you tell us if the following statements are true? Bram Stoker must have travelled to Transylvania to research his novel.
DS: He never did travel to Transylvania; he gleaned the information from various libraries; the London Library and the Whitby Library. He even ventured into Marsh’s Library in Dublin well before he started writing Dracula and looked through a book called Cosmography that actually contained a reference to Walachia and Dracula in 1866, 24 years before he started to write Dracula.

Was Henry Irving the model for Count Dracula?
DS: …partially, Irving played Mephistopheles (The Devil) at the Lyceum for 27 years, which provided Bram with a strong visual representation.  It was also Vlad Dracula lll “The Impaler” from Wallachia, (next to Transylvania, Romania) who provided the name a bit of history and another reference to the Devil that help Bram create his Count Dracula character.

“There are mysteries which men can only guess at, which age by age they may solve only in part.”  I believe that he believed that many people did believe in vampires.

Dacre lives in South Carolina and normally at this time of the year he would be at the Bram Stoker Festival in Dublin, for guided tours and lectures.

About the Bram Stoker Festival
Normally taking place around Halloween each year, horror lovers visit Dublin to celebrate Count Dracula and his creator, Bram Stoker. Born in Clontarf, Dublin, visitors now descend on Dublin to celebrate the master of horror in his hometown. Expect thrills and chills as the Bram Stoker Festival is four nights of deadly adventures, ghastly thrills and ghostly events.

Bram Stoker Festival will not take place for 2021 but will be back bigger and better than ever in 2022 – the year which also marks 125 years since the publication of Dracula.​