•Boston-area musicians Joey Abarta and Alan Murray are among the performers/teachers at the annual Saint Louis Tionól, which takes place April 22-25. They’ll be joined by luminaries such as Liz Knowles, Kieran O’Hare and Pat Broaders (the members of the fine trio Open the Door for Three) along with Colin Farrell of Lunasa, concertina player Brenda Castles, harpist Eileen Gannon and John Skelton, flute/whistle player with The House Band, and others.

Previously known as the Mississippi River Celtic Music Festival, the Saint Louis Tionól has offered sessions, workshops, and concerts of traditional Irish music for almost a quarter-century under the sponsorship of the Focal Point Center for Traditional Arts, a nonprofit with a long, distinguished history of organizing and presenting folk and traditional music events. 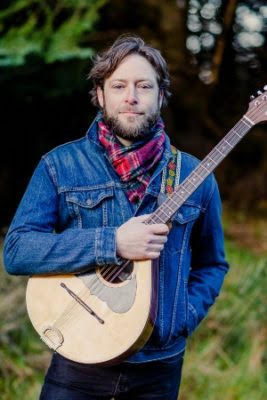 Boston-based musician Alan Murray is among the featured performers/teachers at the Saint Louis Tionól (April 22-25).

The festival begins on April 22 with an introduction of this year’s teachers via Zoom, followed by advanced, intermediate, and beginner-level sessions, all on Zoom; the following night will be a livestreamed concert and a session afterwards.

April 24 will feature morning and afternoon workshops, including beginner-level uilleann pipes (Abarta) and accompaniment (Murray), as well as fiddle, harp, whistle, banjo, concertina, and ballad singing, among others. There also will be a special mid-day presentation, “Women in Piping,” by Louise Mulcahy.  An evening concert will cap the day. The festival concludes on April 25 with afternoon sessions, for singers as well as instrumentalists.

The workshops and sessions will be recorded and made available until May 9. Donations are requested for the concerts. To register or find more details, go to tionol.org.

One important thing to remember: All festival events are on Central Standard Time, i.e., an hour earlier than Boston.

•The Bow Tides is a trio of female fiddlers, including Boston-area resident Ellery Klein, who have a number of things in common, not least is membership in popular Celtic folk-rock group Gaelic Storm (perhaps forever to be known as “That Band in ‘Titanic’”). They’ll be appearing as part of the Pittsburgh Irish Festival Spring Live Stream Series on April 10 at 7 p.m.

Of course, The Bow Tides have plenty of other things on their resumés. A former member of popular local group Long Time Courting, Klein now plays in another Celtic trio, Fódhla, and was among the graduates in the second-ever class of the M.A. in Traditional Irish Music at University of Limerick’s Irish World Music Centre. Jessie Burns – whose stint as Gaelic Storm fiddler was from 2007-12 – was part of Colorado-based band The Wayfarers (which had prominence in the Irish and bluegrass domains) and has played with notable musicians such as Liz Carroll, John Doyle, Johnny B. Connolly, and Darol Anger. Current Gaelic Storm member Katie Grennan is a Pittsburgh native who enjoyed considerable success in competitive Irish dance (she went on to be a lead instructor at the Trinity Academy of Irish Dance) while developing her fiddle skills, and has been involved in both trad Irish and indie folk musical collaborations.

The three have known each other for a while, but their existence as a band has thus far been, yes, virtual. As Klein explains, “It started as ‘Wouldn’t it be fun to make a couple of videos together and send round the Internet, us three Gaelic Storm fiddlers.’” Then Burns was asked to perform at the Spanish Peaks International Celtic Music Festival in Colorado (where she lives) last September, and that turned out to be the debut of The Bow Tides – you can find it on YouTube.

(In case you might wonder: No, none of them were in Gaelic Storm during the band’s cameo in “Titanic.” The fiddler at the time was Samantha Hunt – who, incidentally, has carved out a very fascinating life for herself since then, working as a photographer with a particular interest in surf and travel lifestyle and currently residing in a part of France known as “Little California.” You can look it up.)

For tickets, go to pghirishfest.org/springstreamseries.

•If you enjoy distinguished Irish musicians not only playing the fiddle but talking about the fiddle tradition, Boston College’s Gaelic Roots Lunchtime Series has been a virtual gift. Having hosted Manus McGuire, Gerry O’Connor, and, last month, Oisín Mac Diarmada, the series – which blends real-time presentations with pre-recorded performances – will welcome Matt Cranitch on April 29 from noon-1 p.m.

Cranitch will be focusing on the manuscripts of Padraig O’Keeffe, one of the foremost exponents of the Sliabh Luachra style and sound. Music from that region of Ireland, encompassing parts of Kerry, Cork, and Limerick, is particularly known for its seemingly innumerable polkas, played with a pulsing, and pulsating, rhythm, as well as a variant of jigs known as slides. O’Keeffe, born in Kerry, not only promulgated the Sliabh Luachra tradition but he also made his mark as a composer of tunes and as a teacher, with notable pupils like Denis Murphy, Julia Clifford, and Johnny O’Leary, all of whom went on to achieve their own prominence.

A native of Cork, Cranitch has been a member of such well-respected bands as Na Filí, Any Old Time and, more recently, Sliabh Notes. He has also toured and recorded with another Sliabh Luachra denizen, accordionist Jackie Daly, and released “Éistigh Seal,” a solo album of slow airs. Cranitch is an author as well, having published “The Irish Fiddle Book,” and contributed to other books on Irish music.

Cranitch is, not surprisingly, a frequent speaker and writer on the music of his home region, and on O’Keeffe in particular: He received a doctorate from the University of Limerick in 2006 for his study, “Pádraig O’Keeffe and The Sliabh Luachra Fiddle Tradition.”

Gaelic Roots Lunchtime Series events, hosted by the BC Irish Studies Program [bc.edu/irish] in partnership with the John J. Burns Library, are livestreamed via the Gaelic Roots Facebook page and YouTube, then archived by the Burns Library Irish Music Archives [youtube.com/BurnsLibraryIMC].

•The New England Folk Festival – popularly known as NEFFA, the acronym for New England Folk Festival Association – will return in virtual form April 23-25 after last year’s Covid-caused cancellation. For more than seven decades, NEFFA has featured both performative and participatory music and dance for all ages from numerous folk traditions and cultures, including Irish, Scottish, and Cape Breton, among others. It is almost entirely an all-volunteer effort, and that includes the music and dance performers, some of whom make a living from their chosen art. 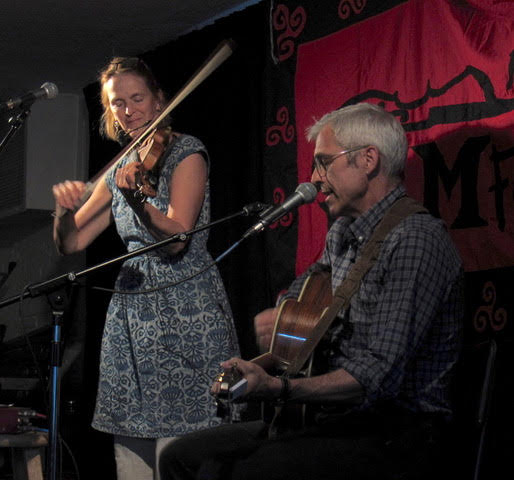 Becky Tracy and Keith Murphy will be part of the first virtual NEFFA (April 23-25).

Among those NEFFA 2021 performers with a Celtic-related dimension to their music are: Janie Rothfield and Alan Carr; Becky Tracy and Keith Murphy; The Vox Hunters; Owen Kennedy; Jim and Susie Malcolm; Clare Boucher and Brad Hurley; and Molly Tucker and Casey Murray. There also will be instruction/demonstration via Zoom of various dance traditions, including Irish sean-nós, Scottish ceilidh and country, and New England contra.

While nothing can capture the size and spectacle of in-person NEFFA, which since 1974 has been held on the high school campuses of Natick and then Mansfield (the festival was in the midst of transitioning to its new site at Acton-Boxboro Regional High School last March before pulling the plug), organizers hope to convey the festival’s spirit of engagement through music, dance and other activities.

Also, organizers note that for this year, rather charging a fixed fee for a ticket, they are encouraging attendees to donate to the NEFFA 2021 Fund: “After covering the small fixed costs of running the festival, this fund will be split among the NEFFA performers and skilled techs who are volunteering their time and talent to make this online festival happen.”

•Beloved Yorkshire singer-songwriter Kate Rusby and her husband, Coleraine native Damien O’Kane, have kept busy during the pandemic through regular uploads to her YouTube channel (this column is not going to address the matter of whether Rusby belongs in the “Celtic” category; suffice it to say, she has long appeared on Celtic radio show playlists). These videos, such as the “Singy, Songy Sessions” series, have a delightfully informal, homespun feel – which is fitting, since most all of them were made in and around their home – sometimes including guest appearances by their two young daughters as well as a neighbor or two, and enlivened by Rusby’s uninhibited enthusiasm.

On April 10, Rusby, along with O’Kane and the rest of her band, will present the first live performance of her 2020 album “Hand Me Down,” a selection of covers of contemporary songs, including hits like The Bangles’ “Manic Monday” and Taylor Swift’s “Shake It Off,” classics such as Bob Marley’s “Three Little Birds” and James Taylor’s “Carolina In My Mind” and even “Maybe Tomorrow,” the theme song to the Canadian TV series “The Littlest Hobo.” It’s not entirely a departure for Rusby, since she has done versions of the 1950s pop ballad “You Belong to Me” and The Kinks’ “Village Green Preservation Society,” among others, in moving to a generally more folk-rock sound.