Téada, “Coiscéim Coiligh (As the Days Brighten)” • Almost as old as the 21st century, Téada has long been at the forefront of Ireland’s tradition-oriented bands, built around the vibrant, skillful triumvirate of fiddler Oisín Mac Diarmada, accordionist Paul Finn, and flutist Damien Stenson and the equally dynamic accompaniment of Seán McElwain’s bouzouki and guitar and Tristan Rosenstock’s bodhran. Their appeal stems in large part from their scrupulous balance between the strongly traditionalist focus on the melody player and the more modern ensemble approach highlighting the artistry of rhythm players as well.

About 10 years ago, Téada added an auxiliary member in West Kerry accordionist and singer Séamus Begley, whose old-school raconteur personality and extensive song repertoire introduced a new dimension to the band. More recently, Mac Diarmada’s wife, the American-born pianist and dancer Samantha Harvey, joined the group for some performances and, now, for this recording.

As a result, and as is quite evident on “Coiscéim Coiligh,” Téada has practically become its own festival showcase, presenting different facets and textures of Irish music: “classic-style” instrumental sets and tunes (such as that old favorite “The Staten Island Hornpipe,” played here as a slow reel, or the Donegal barndance “Kitty Seán Cunningham”) and others more contemporary-minded; songs from the sean-nos tradition; and pieces that have echoes of vaudeville or music hall.

A piano can be a rather formidable presence, but Harvey integrates seamlessly into the band, providing heft to the overall sound without constricting or overwhelming the other instruments – McElwain and Rosenstock are given plenty of space on the rhythmic end, and her touch is especially light on a winsome set of recently composed reels, “Greta’s Favorite” (Richie Dwyer), “Grist for the Mill” (Michael Mc Cague) and “Ríl Johnny Phádraig Pheter” (Johnny Og Connolly). But there are other occasions where she rises to the fore – in fact, right at the start of the very first track, which begins with Seán Ryan’s “Ar Mhuin na Muice”: She lays down a repeating arpeggio and complementary bass line that becomes a counterpoint for a blazing lead by Mac Diarmada, Stenson, and Finn, and adds some impressive-sounding chords for extra gravitas.

One creatively arranged set begins with a solo by Finn on Rosenstock’s jig “Farewell to Stoneybatter,” which leads to a plaintive slow air, “An Raibh Tú an gCarraig” – the melody of a song concerning English penal laws in occupied Ireland, where Catholic Masses had to be held in secret – played exquisitely as a duet by Mac Diarmada and McElwain (with a fine, sensitive stroke on guitar); then the band all joins in for Monaghan fiddler Dónal Mc Cague’s dramatic “March at Kilmore.”

Rosenstock’s bodhran is the constant, common thread for a comely, well-engineered trio of jigs that spotlights the melody players in a kind of tag-team fashion: It starts with “The Women of Monaghan” (by the estimable Ed Reavy), which Mac Diarmada unhurriedly stokes up to medium tempo before Finn takes it on and then launches solo into “Nancy Hynes’”; Stenson joins Finn the second time through, and he and Harvey pair up to do a glorious turn on “Tap the Barrel” for one round, Mac Diarmada and then Finn returning to close things out (it’s easier to just listen to the track rather than read about its logistics).

Begley’s contributions include “The Snowy Breasted Pearl,” translated from Irish by noted scholar George Petrie and included in his venerable collection, with a melody attributed to Turlough O’Carolan – given here a respectfully formal and romantic setting with appropriately parlor piano-like backing from Harvey. He also offers up two songs in Irish, “Oileán Dhún an Óir” – featuring lovely accompaniment from Begley on accordion and McElwain on guitar – and “Eochaill,” which is associated with the French pastourelle style that became a hallmark of 18th century Irish poetry and song.

And then there’s Begley’s rendition of “Eileen Óg,” with guest vocalist John C. Reilly (star of stage and screen): Written by Percy French (1854-1920) and set to the traditional hornpipe “The Pride of Petravore,” it’s part of that illustrious Irish tradition of simultaneously celebrating and razzing colorful language, full of comically aligned phrases about an improbable courtship (“He never seemed to see the girl at all/Even when she ogled him from underneath her shawl/Looking big and masterful when she was looking small/Most provoking for the Pride of Petravore”). Reilly and Begley strike exactly the right tone, treating the song with respect while giving us a subtle wink.

The preceding paragraphs may sound like excerpts from different, disparate albums instead of just one, but “Coiscéim Coiligh” is the product of a band with a unified, strongly defined musical vision and the ability to bring it to life in a delightful way. [teada.com] 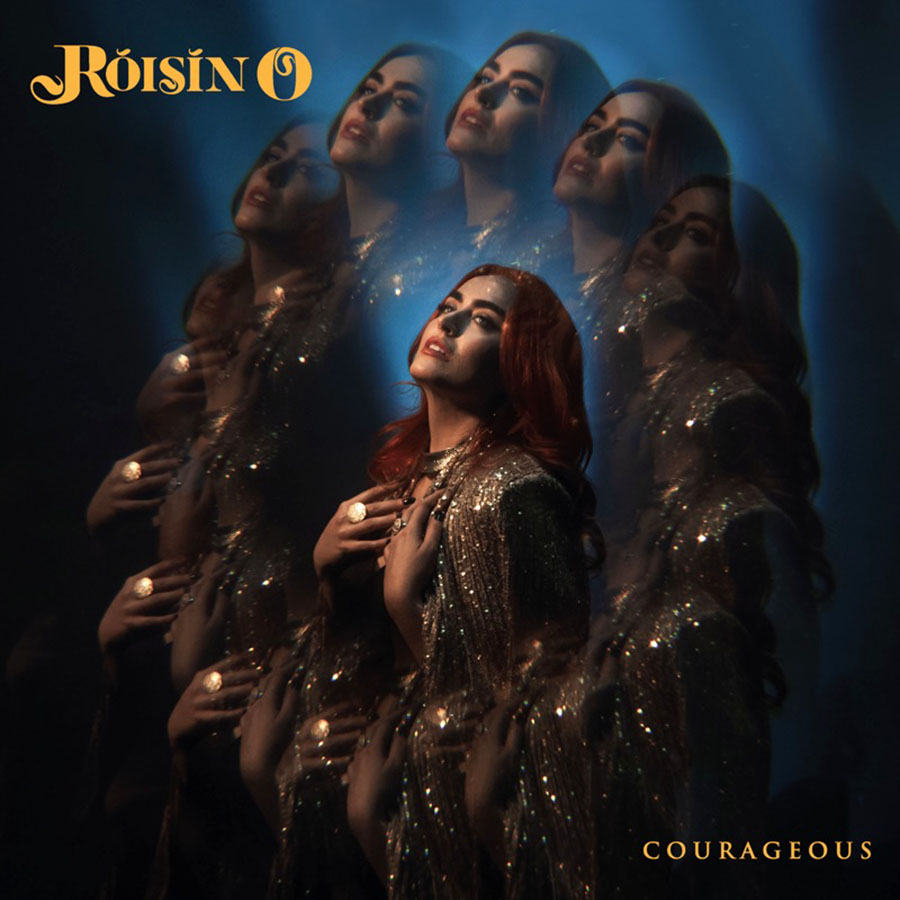 Róisín O, “Courageous” • Definitely in the long-time-coming category, “Courageous” is Dublin singer-songwriter Róisín O’s first album since her debut “The Secret Life of Blue” in 2013 – the year she put on a terrific show at The Burren as part of her first US tour. The alt-folk “Blue” garnered positive reviews praising her vocal range and command, as well as the directness and simplicity of her writing (such as the whirl-a-gig rapture of “Here We Go”). She had some high-profile exposure during that period: opening for Lionel Richie on his US tour, appearing on RTÉ’s “The Late Late Show” and performing for Irish President Michael D. Higgins at a St. Patrick’s Day live TV broadcast along with the likes of Bono, Christy Moore, Glen Hansard, and Imelda May.

Róisín went on to cut some singles, make videos, and continue to perform as a soloist and in collaborations. She also toured with her mother, legendary singer Mary Black, and brother Danny O’Reilly, a member of the pop band The Coronas. But albums still seem to count for something as milestones in tracking an artist’s career, so as time passed it’s fair to say there was curiosity as to when she would follow up “Blue.”

And now, finally, we have “Courageous,” which affirms her movement in recent years – glimpsed in some of her post-“Blue” work – to far more of a pop style, sporting a glossy production sound and peppered with electronic rhythms and effects. A great deal of the album took shape emotionally as well as artistically in the 2020 lockdown, as Róisín explained in an interview with RTÉ earlier this year: With no performances or collaborations in the offing, she was at a crossroads (“I felt very daunted about coming back to Róisín O”). So she simply began to write and write, looking inward for form and content but also contemplating the wider world and what it might be like once lives resumed some semblance of normality.

Given this backdrop, “Courageous” is dotted with allusions to the strain and dislocation so widely experienced during those long months: “How have you not worked it out?” she sings in “Stolen,” to an emotive piano accompaniment. “It’s hard enough to take/We didn’t give it all away/It was stolen.”

“2023,” with a dance-track ambience of hope and resilience, alludes to the possibility of renewal in the near future: “Our first dance moved so fast but where we gonna be/In 2023 we could be/Alright if we just try/Have courage and be kind/We’ve still got time.”

“Still Gold,” co-written with John Broe (with whom she collaborated for a while as Thanks Brother), is about achieving enough distance to feel concern for an ex who’s veered off the rails (“Lovers grow, new paints they flow/But the friends that once knew you can’t get through to you/But I know you’re still gold “). And in case one might forget her folkie roots, “Better This Way – written with Broe and C.C Breslin, and originally released as a single in 2016 – is a substantive reminder. Broe’s bluesy acoustic guitar behind her, Róisín moves to the lower part of her register as she sings of a chillingly dysfunctional relationship (“The day will come when you swallow this gun”).

It’s fitting, then, that the album’s title track – almost gospel-like in its assuredness – also is its climax, chronologically as well as sequentially. The song, she says, “relates to the circumstances of the album’s creation as a whole,” in that it focuses on the challenge and necessity of a complete change of course (“If you want me/You know where to find me/If you don’t/Don’t remind me”), and being confident about the results. At the end, the refrain “I gotta be courageous” changes to “I’m gonna be courageous.”

If you remember the Róisín O of that 2013 Burren show, the pop stylings on “Courageous” may take some getting used to, but ultimately Róisín’s power and presence make it impossible to simply dismiss the album. Nothing calculated or cloying here, just a tremendous amount of emotion and a phenomenal voice to match. [roisino.com]