Former Greater Boston resident Emerald Rae will be performing locally on July 7 at The Rockwell in Somerville’s Davis Square. Photo by Anna Colliton.

A look at Irish/Celtic events in Greater Boston and elsewhere in Massachusetts during this month. All subject to change pending possible Covid-related developments.

•The rural roots of Irish traditional music, and its connection to the natural world, are at the heart of “Stop & Listen: Irish Music’s Invitation to Observe,” which takes place July 10 from 2:30-4:30 p.m. at the Medford Condon Shell.

Boston-area fiddlers Ellery Klein and Laurel Martin will team with local step dancer Kieran Jordan and New Hampshire-based guitarist Jim Prendergast for a concert of traditional Irish melodies with a common theme: They’re all named after birds, farm animals, plants, and natural features, composed and played by musicians whose lives were intertwined with the landscape.

Klein, formerly with Gaelic Storm, plays as part of the New England trio Fódhla and fiddle band The Bow Tides. Known for her graceful and lyrical style, influenced in particular by the music of Clare, East Galway and Sligo, Martin has performed throughout New England as a soloist as well as in collaborations including Childsplay and late Scottish singer/guitarist Tony Cuffe. Jordan has long been a vital force in Greater Boston and beyond as an Irish dance performer, teacher, and choreographer. Prendergast has been much in demand as an accompanist – including with Martin – as well as a producer of many Irish/Celtic recordings.

Complementing the musical performance will be a nature education program for all ages by the Mystic Valley Watershed Association, which will encourage those in attendance to be more in touch with the natural world.

As the organizers note, the Irish music tradition took root in Ireland’s rural settings. Those who played the music usually worked on farms and in the fields, where they were able to observe the flora and fauna around them, and witness the changes to the landscape as the seasons progressed. Some of the jigs, reels, and other tunes in the tradition composed and played by these rural musicians even express the features of nature: birdsong, bleating sheep, flowing water. Audience members can reflect on how these tunes resonate in a modern, urban society that is less connected with, and dependent on, the natural world.

The event is free and open to all, supported in part by a grant from the Medford Arts Council, a local commission that is supported by the Mass Cultural Council and the City of Medford. The Medford Condon Shell is located at 2501 Mystic Valley Parkway.

•When they’re not with Celtic Thunder, Neil Byrne and Ryan Kelly perform as a duo, Byrne and Kelly, and will bring their act to the Irish Cultural Centre of New England in Canton on July 7 at 7:30 p.m.

What began 10 years ago as the “Acoustic by Candlelight” series featuring the pair morphed into a full-fledged partnership built around their vocal harmonies and acoustic guitar-playing, drawing comparisons to the Everly Brothers and Simon & Garfunkel. Byrne and Kelly’s repertoire draws on popular Irish/Celtic standards (“Raglan Road,” “Fields of Athenry,” “The Water is Wide”) as well as Americana and folk-rock (“Step It Out Mary,” “Saints and Sinners,” “Wagon Wheel”). They’ve also turned to original material, as reflected in their 2016 album “Echoes,” which became the basis for an award-winning documentary, “Echoes: The Story,” that has been shown on PBS.

Local favorite Devri holds its “Summer Party” at the ICC on July 9 at 6 p.m. Declan Houton (vocals, guitar, mandolin), Larry Flint (vocals, bass, guitar), Chuck Parrish (guitar) and Steve O’Callaghan (drums, percussion) play plenty of Irish classics and covers of The Pogues, Dubliners, and Wolfe Tones, but are equally fond of crossing over to the likes of The Beatles, Johnny Cash, and Snow Patrol, among others.

On July 23 at 7 p.m., the ICC will host Boston duo For Folk Sake. Irish natives Cian Clifford and Simon Kennedy have made the rounds of pubs in Quincy, Weymouth, Cambridge, Dorchester, and elsewhere – and toughed out the 2020 lockdown with Facebook events – building an appreciative audience with Irish folk as well as covers of popular and contemporary music.

For information on all Irish Cultural Centre events, see irishculture.org.

•There’s nothing like an intergenerational pairing of superb Irish musicians, and that’s what you’ll get on July 24 at 3:30 p.m. when the Burren Backroom series presents fiddler Brian Conway and Boston-area guitarist Conor Hearn. New York City native Conway is one of the more revered Irish American fiddle players, especially renowned for his mastery of the Sligo style, which he learned through legends such as Martin Mulvihill and Andy McGann. His albums include “Consider the Source,” “First Through the Gate” and (with Tony DeMarco) “The Apple in Winter”; he’s also appeared on recordings such as “The Boston College Irish Fiddle Festival: My Love is in America” and “Irish in America: A Music Record of the Irish People in the United States.” Hearn has, in a short time, become a high-profile member of Boston’s Celtic music scene, as part of the duo Rakish with fiddler Maura Shawn Scanlin, with whom he also plays in the progressive folk quintet Pumpkin Bread; Rakish’s recent first full-length album, “Counting Down the Hours,” was a highly regarded release. He’s also appeared in numerous collaborations at venues and events around Greater Boston, including BCMFest.

For a link to tickets, go to the Burren music calendar at burren.com/music.html.

•Sea chantey singer extraordinaire and improbable TikTok star/influencer David Coffin and The Johnson Girls – no slouch in seafaring sagas themselves – will be at Rockport’s Shalin Liu Performance Center July 16 at 7 p.m. for an evening of maritime music and stories. Many people in Greater Boston have known Gloucester resident Coffin for years through his appearances at Revels (he has done more than 70 different productions) and other maritime-related events. He has released or participated in numerous recording projects as a singer and instrumentalist, playing music of North America, England, Scotland, Ireland and Brittany. His rendition of “Rolling Down to Old Maui” on TikTok – which got 46,000 “likes” in the week after he posted it in early 2021 – helped spur a sea chantey “craze” on the video platform. He has also gained further exposure through his sea chanteying cameo in the Amazon Prime movie “Blow the Man Down.”

The Johnson Girls (Joy Bennett, Alison Kelley, Bonnie Milner, and Deirdre Murtha) have performed their a cappella takes on maritime songs traditional and new at venues and festivals throughout the US, Canada, Great Britain, and Europe. In doing so, they’ve played a large part in changing the perception of chanteys and songs of the sea as the province of male singers. More to the point, they bring swagger and spice to their shows, much to the delight of those who see them.

If you missed We Banjo 3 (or you didn’t) when they were at the Somerville Theater in May, the Galway Irish-Americana quartet will be at Shalin Liu on July 19 at 8 p.m. Brothers Enda (tenor banjo) and Fergal Scahill (fiddle, bodhran) and David (guitar, lead vocals) and Martin Howley (mandolin, tenor banjo) are widely acknowledged as the originators of “Celtgrass,” a mix of Irish and American folk sounds that are inspired by tradition while embracing pop and other modern styles. Known for their sheer musical ability, tight playing, and force of personality, the Scahills and Howleys In recent years have focused more on their own compositions, which include musings on social issues of the day.

Irish tenor Ronan Tynan closes out the Shalin Liu’s July slate on July 31 at 5 p.m. A Dublin native raised in Kilkenny, Tynan was co-founder of the internationally popular Irish Tenors. For more than two decades, he has showcased his powerful, operatic/classical-style voice at such landmark events as the state funeral for Ronald Reagan, the Belmont Stakes, benefits and memorial services for 9/11 first responders, and the first inauguration of Boston Mayor Martin Walsh. In addition to a number of audio recordings, Tynan – who overcame serious disabilities that resulted in the amputation of his legs at age 20 – has released a DVD of his motivational speaking.

For tickets and other details on Shalin Liu events, go to rockportmusic.org.

•The High Kings play at the Lowell Summer Music Series – which takes place in Boarding House Park – on July 22 at 7:30 p.m. The internationally renowned ballad group (co-founders Finbarr Clancy, Darren Holden, Brian Dunphy, and more recent arrival Paul O’Brien) were inspired by the classic Irish ballad style that swept into popularity during the 1950s and ’60s through the likes of the Clancy Brothers and The Dubliners. The quartet has toured extensively throughout the US and Europe, combining modern songs in the folk idiom – and even from other genres – with some of the classic ballad repertoire. Their most recent recording, “Home from Home,” captures their performance at the Concert Deck in Dublin, and includes “Wild Colonial Boy,” “Farewell to Nova Scotia” and “Carrickfergus,” as well as contemporary songs like “Streets of London,” “City of Chicago” and “Green Fields of France.” 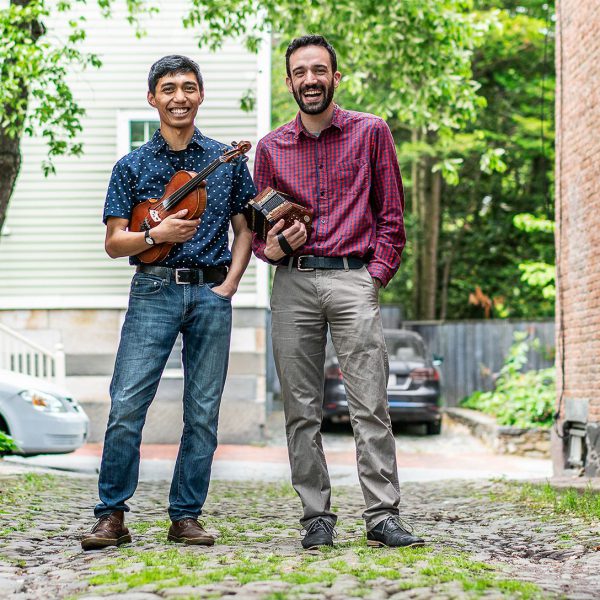 The Vox Hunters (Armand Aromin, left, and Benedict Gagliardi), who have been active in the local Irish music scene for a number of years, will be at the New Bedford Folk Festival July 9 and 10. Photo by Anna Colliton.

The New Bedford Folk Festival marks its 25th year on July 9 and 10 with performances at multiple venues, including the Zeiterion Performing Arts Center. As always, the festival roster includes a number of acts in the Celtic (and related) music vein. Among them are one-time Greater Boston resident Emerald Rae, who has taken her Scottish/Cape Breton fiddling to new vistas, featuring original songs strongly influenced by tradition (she’ll also be performing locally on July 7 at The Rockwell in Somerville’s Davis Square – see therockwell.org); The Vox Hunters, the duo of Armand Aromin and Benedict Gagliardi, Rhode Islanders who are well-ensconced in Greater Boston’s Irish music scene but also employ their talented musicianship, infectious singing and good cheer in various iterations of American folk; and RUNA, which fuses Irish and Scottish music with Americana/roots, adding harmonies, rhythms and tints of jazz, bluegrass, flamenco and blues.

Meanwhile, Cherish the Ladies is in the lineup for the Lowell Folk Festival (July 29-31), known for its diverse ethnic and cultural offerings. The all-female band was a revelation when it first began performing in the 1980s and has become a dearly loved mainstay and valuable exponent of Irish American heritage. As co-founder  Joanie Madden (flute, whistle, vocal) put it in a 2019 Boston Irish interview, the music they play is “like a golden chalice passed down. Cherish the Ladies is all about being true to the tradition and legacy, not just putting on a tune.” Madden’s bandmates are Nollaig Casey (fiddle, viola), Mary Coogan (guitar, banjo, mandolin), Mirella Murray (accordion), and Kathleen Boyle (keyboards, vocals).