Patrick "Patsy" Touhey, one of the most celebrated Irish entertainers in America during the late 19th and early 20th century.

“His own story is such a great one,” explains Abarta. “He is the poster boy for Irish music in America, and a key figure in the history of the uilleann pipes, which, of course, is such a vital part of Irish traditional music.”

And because Touhey’s life included a significant period spent in Boston, it’s only fitting that a major event recognizing his contributions to Irish music take place here, adds Abarta.

That’s the reasoning behind the first-ever Patrick J. Touhey Weekend, which will run from April 29 to May 1 primarily at the Canadian American Club in Watertown. The weekend will feature workshops and presentations, appearances by acclaimed musicians and scholarly experts, as well as a concert/session Saturday night at the club (located at 202 Arlington Street in Watertown), and culminate in a special evening on Sunday at The Burren in Somerville. 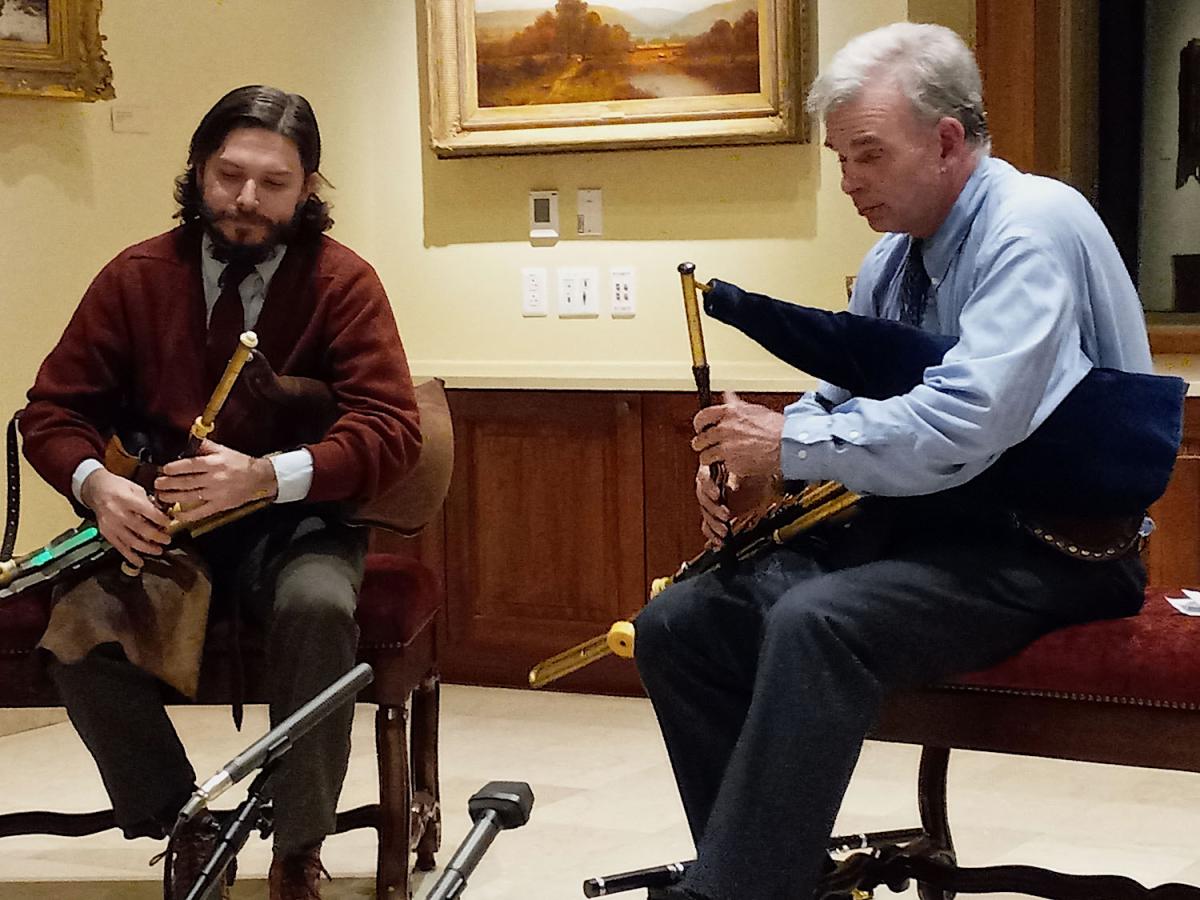 Jerry O'Sullivan (right), who will be among the uilleann pipers at the Patsy Touhey Weekend, shown performing at Boston College earlier this year with Joey Abarta, co-organizer of the event. Sean Smith photo

But Abarta, the event’s co-organizer, says that while Touhey is the weekend’s namesake and inspiration, he will not be the sole topic but will serve as a major point of reference for a consideration of Irish music in America during the 19th and 20th centuries.

Still, Abarta says, there is no question Touhey deserves the stature implicit in the event’s title. “Patsy is born in Galway into practically a whole family of pipers, and then he comes to Boston as a very young child and stays here for probably about 15 years. Early in his 20s, he becomes a professional piper, but that’s only part of it: He is involved in a whole theatrical life, including as an actor and vaudeville performer, taking part in shows – ‘hibernicons’ – that were designed to appeal to Irish American audiences. He and his wife May became a vaudeville act and he later co-formed a touring company that played at New York and other large cities.

“He also comes to the attention of the famous Chicago Irish music collector, Captain Francis O’Neill, who collected several tunes from Touhey for what became “O’Neill’s Music of Ireland” – still one of the most influential published collections of Irish traditional music. Touhey even becomes a pioneer in recording technology: He made and sold cylinder recordings of himself – you could say he was selling singles before the concept was even invented.

“So, as the idea of mass entertainment took hold in America, Touhey was right there, and in the process, he helped bring Irish music and culture to a wide audience. And he is unquestionably one of the most influential uilleann pipers: His music, his playing still stand the test of time.”

Abarta’s co-organizer and fellow piper, Sean Gavin – the first and only non-native Irish musician to win the prestigious Seán Ó Riada gold medal – will be among those running workshops during the weekend. Also serving as tutors are All-Ireland Champion Michael Stribling, a member of the bands RUNA and Fullset, who will focus on Touhey’s use of ornamentations and other techniques; and Dublin native Fionnán Mac Gabhann, who brings an academic bent to his involvement in Irish traditional music as a doctoral candidate in folklore studies at Indiana University.

The scholarly presentations will include Touhey-centered subjects, such as “Patsy Touhey: His Music and His Mystique” by Barry O’Neill, but also take a broader view on the era in which Touhey flourished: Richie Piggott will discuss the personal history of the pipers and their pipes in Chicago over the past 100 years, while Nick Whitmer will offer a look at the kinds of show business gigs – from stage plays to dime museums to motion pictures – available to uilleann pipers during Touhey's lifetime.

“It’s a way to get a bigger picture of the times in which Tuohey lived, and to put Irish music and culture in a larger context – and an American one,” Abarta says. “You may not play the uilleann pipes, or any musical instrument, for that matter, but if you have an interest in Irish music and the Irish experience in America, these presentations are a good reason to attend.

“And, in the bargain, you get to hear some excellent Irish traditional music.”

There also will be a number of special guest musicians taking part during the weekend, especially the Saturday night concert, among them Kieran O’Hare and Liz Knowles (two-thirds of acclaimed trio Open the Door for Three), Jerry O’Sullivan, and Benedict Koehler.

The climactic event of Touhey Weekend will be “The Pipers Chair” at The Burren, which Abarta describes as an “open mic” for the piping tutors and experts – likely involving some spontaneous sets with a surprise guest or two.

Abarta says the long-term plan is to make Touhey Weekend an annual event, and perhaps a moveable feast. “There are so many threads running through the story of Patsy Touhey and Irish music in America. It would be wonderful to get together every year, whether in Boston or elsewhere, share insights about this legacy and, most of all, enjoy the music together.”