My husband and I recently moved our children to a new home after living for ten years in our home in Dorchester. Newton may only be 11 miles away, but in these days of COVID-19 and quarantine, at times it feels more like a cross-country move.

My mother, Mary Casey Forry- who was the child of Irish immigrants from Co. Leitrim and Co. Mayo- grew up close to our new hometown, in Belmont. I spent a good deal of my childhood in this neck of the woods and retain fond memories of the area, driving with Mom past the Putterham Golf Course and winding our way through Newton and Watertown Square over to Gran Casey's home in Belmont, where my mom was raised with her three siblings.

This past weekend, my husband and I decided it was time to tackle the still-packed boxes in our new living room- mainly out of desperation for a dedicated space for our kids to keep their worldly treasures and give us a bit of peace and quiet for a change.  The prospect of a several weeks' long quarantine was all the motivation we needed to busy ourselves with setting up a playspace for dollhouses, legos and art supplies.

I breathed a sigh of relief when one of the boxes we unearthed was one I'd been worrying had been lost in the move. In it I found my mom's high school diploma, some photos from her youth, and two passports- one issued by the Irish Free State and the other, the United States of America- belonging to her mother, Mary Kate Kane. 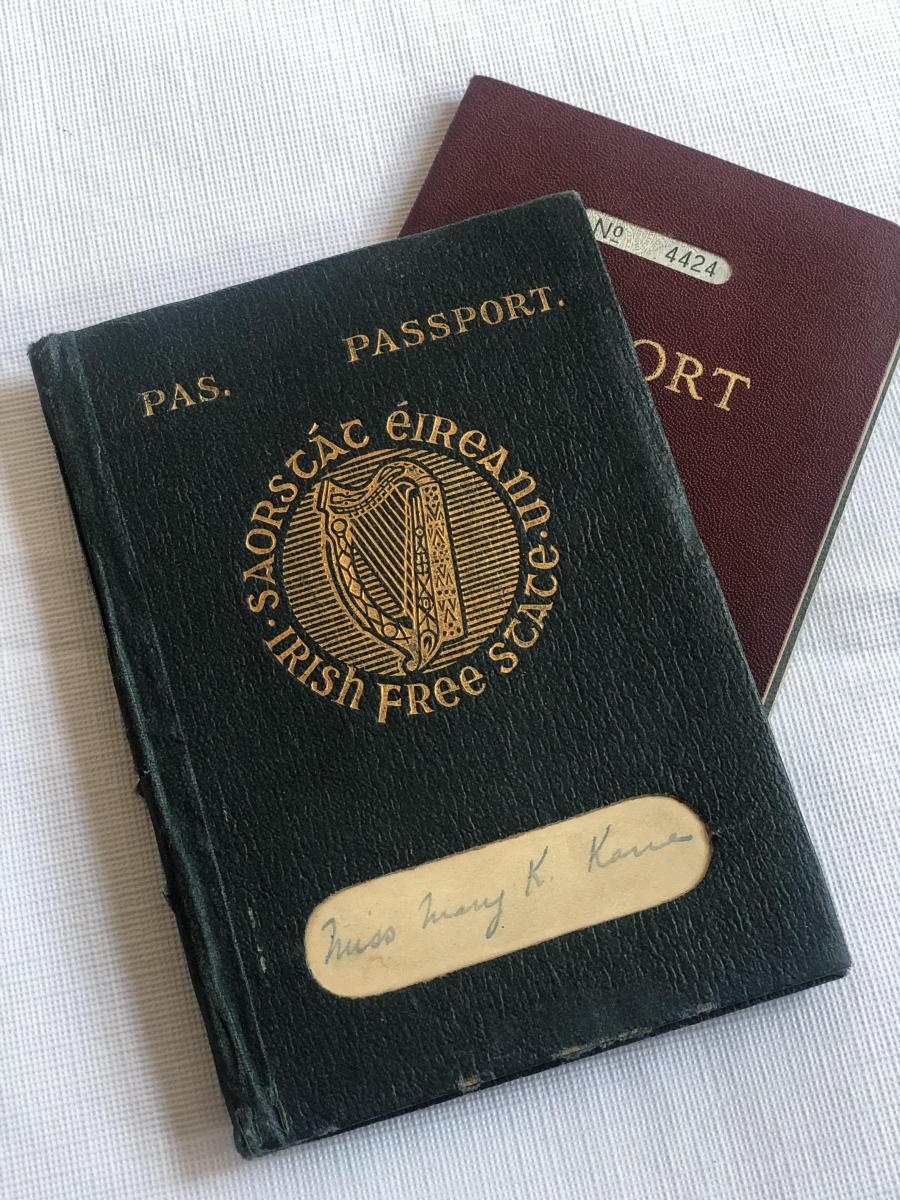 The earliest of my Grandmother’s passports is dated 1926 and is the passport which first brought her to the USA. She was merely sixteen years old and was the only one of her siblings to be sent to the US. Both her brother and sister stayed behind to tend to the house in County Leitrim. Imagine being 16 years of age and being shipped to a new country for work while your friends and family stayed behind. Sadly the photo of my teenaged grandmother is missing from the booklet.

There is also a second Passport dated 1937, and has only two stamps in it: Ireland and Boston. My original assumption that this trip home was a happy oneproved incorrect. Gran was returning home to visit her ailing mother. Alas, she did not make it in time to say goodbye, and her mother, Katherine, died before Mary Kate was able to see her.

It was during that 1937 trip that Mary Kate was involved in a bicycle accident which nearly severed her femoral artery. The nuns that cared for her in the hospital following this injury were memorialized by my grandmother by naming her future daughters in their honor- they were Kathleen Marie, Margaret Ellen, and Mary Frances (my mother).

Like many immigrants from Ireland in the 1920s, Gran found work as a domestic, and eventually took a job with a reportedly lovely family in Rhode Island who also owned homes in Miami, FL and Bridgeton, ME. Part of Gran's job was to travel to Florida ahead of the family each winter and "Air Out" the Miami house. This family, the Reynolds, also purchased Gran's wedding dress when she married my Grandfather (whom I never did meet). I still have her wedding gown in a hope chest- a gorgeous ivory duchess satin. I’m told by our family historian that the Reynolds’ also footed the bill for the couple’s wedding reception at the swanky Biltmore Hotel in Providence, RI. The wedding took place in June of 1940.

Some of my earliest and coziest memories are of Mom and me visiting the modest Belmont two-family to lift Gran’s spirits. I didn't know then- or rather, I had a child's understanding- that most of those visits to Gran's were made while she was fighting terminal cancer. Those trips were my mom's necessary therapy to care for her mother in her final days and to enrich that Mother-Daughter bond. It was, honestly, a precious time in both Mom's and Gran's lives.

I remember Gran teaching me how to form my numbers by removing a clock from her wall and placing it on the table, wrapping her hand around mine and tracing the numerals onto a blank sheet of paper, her soft Leitrim accent- I can still hear her voice, luckily- gently encouraging me.

As I unboxed ths cardboard box of treasures, I excitedly posted photos of my find on my private facebook page, and within minutes, three cousins who live in Ireland responded and commented. American friends exclaimed about the striking resemblance between my grandmother and my brother and me, as well as our children.

Thinking about this age of instant communication and connection, I’m struck by the differences in my grandmother’s life and mine.  I wonder if Mary Kate ever envisioned a world where cousins, who’ve only met two or three times, would have a near-daily presence in each other’s lives, in spite of our separation by the Atlantic. I’d imagine, as such a young immigrant, she assumed we would be as disconnected from our ancestral home as she felt as her ship pulled out of port. I’m blown away that the opposite has proven true- that in this day and age, we’ve been given the gift of extended family and connectivity. To be a living part of a growing family tree. It’s a far cry from the long-distance calls to Ireland that happened once per year when I was a child.

All of it is contained in that small, leather-bound booklet, still sturdy after all these years. Jobs, marriage, children, grandchildren, cousins, memories. The “Story of Us” is written on the pages that traveled with her across the Atlantic on that weeks-long journey all those years ago. Perhaps if there is a silver lining to the quarantine we’re all experiencing, it’s that we are given the gift of time to reminisce and, hopefully, learn more about those who laid our foundations here in the US.

Thank you for the visit, Gran. You are missed.